Friends Gay/Lesbian storylines then vs now

"You get to be the baby's father, everyone knows who you are and who am I? There's Father's day, there's Mother's Day. There's no lesbian lover day!" Susan Bunch


When Friends aired up until it's end there was always sort of a taboo around being gay, especially when it came to the guys being in any way intimate with one another even something as simple as a hug.


Ross was ridiculed and mocked about the fact that he neither knew his wife was gay nor saw that their relationship would soon rapidly end after having a threesome with one of Carol's girl friends. I don't think the fact that Carol is a lesbian phased him, either way he was going to be hurt as she was leaving him for someone else and so begins the saga of divorces Ross will endure. Susan also kind of mocked Ross in the sense that she wanted Carol and Ross' child when attempting to suggest that her surname should be part of the child's name rather than Ross'. Now I can understand the baby having Susan's surname if there is no present father figure involved, however since she did in fact destroy their marriage she should not then try to dictate such an important factor of Ross and Carol's baby life. Ross may not be a live in parent (obviously not through his choice) but he is still a full time Dad and very much wants to be involved in the upbringing of his first born child. Somehow Ross and Susan were able to put their differences aside and co parent along with Carol always making sure all three agreed on Ben's upbringing.

Then again it was also sort of respected as Carol and Susan did get "married" (it wasn't legal back then) but they had a ceremony with their friends and family where they professed their undying love to one another, exchanged rings and vowed to be together always. The beauty of it was neither of them was going through a phase, neither of them cheated, nor did they break up. They appeared to be in a healthy monogamous relationship well from what we saw of their relationship. We heard about Susan as a storyline mainly based around Ross and his relationship breaking down, we hear about Susan and Carol when he admits to Joey and Chandler that the threesome didn't go very well as both

women kept pushing him away. They resurface again when Carol announces that she is pregnant and keeping the baby, obviously she's around for "9 months" for the pregnancy, then they're in and out of the series with rather small scenes as i'm not sure you can call them story lines. The only downfall of Susan and Carol's wedding is the fact that everyone of the wedding guests were lesbians. Yes the couple is a lesbian couple but they would have straight friends too not just gay ones. As well as the fact that yes they would have stereotypical lesbian friends but also lipstick lesbian friends.
Now.......
If Susan and Carol's love story was to be represented now it would be more like Lena and Stef's relationship in 'The Fosters' where Lena does not try to replace Brandon's father but instead is just another mother to him. Sharing the responsibility, love and reassurance of the other parents. Brandon seems to assure Lena in his own subtle ways that she is just as much his parent/Mom as his biological parents. Besides coming from a multicultural family they seem to all accept that blood doesn't make you family but instead the bond, love, compassion and what's in your heart does instead.


"For the record I love having two Moms." Brandon Foster

"Let us keep the apartment and…" Rachel

"As a thank you, Rachel and I will kiss for one minute." Monica

[Time lapse. The guys are entering their apartment.]

"Totally worth it!" Chandler

"That was one good minute!" Joey

Then.....
Rachel and Monica had many questionable moments which looking back now I think was purely for laughs or maybe was just seen as acceptable as they were both heterosexual women who were constantly in relationships or eyeing up men. The kisses, cuddles and what could be seen as intimate moments are that but just between the best of friends. Females are constantly cuddling, dancing, embracing one another it's a part of their make-up and we don't see anything wrong with it. However sometimes girls will use  it for their own personal gain for instance when Rachel and Monica kissed for a minute for Joey and Chandler as a thanks for letting them keep their apartment. Although the difference is when Friends came out females rarely made out with one another just for the sake of getting a men's attention. 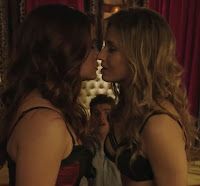 Now......
Whereas now unfortunately they do for instance in 'Faking It' when Karma convinces her and her best friend Amy should continue the charade of being lesbians who are very much in love all for her crush Liam Booker. It seems the more committed Karma seems to Amy and vice versa the more interested Liam is in turning the lipstick lesbian as he puts it.